Carla Sunberg (born July 1, 1961) is an American ordained minister in the Church of the Nazarene, administrator, academic, author, speaker and former missionary and registered nurse, who is the first woman and the 10th person elected as president of Nazarene Theological Seminary (NTS). At the time of her election on January 3, 2014, Sunberg was co-District Superintendent (with her husband Charles H. "Chuck" Sunberg) of the East Ohio District of the Church of the Nazarene, having served in this role since November 1, 2011. For almost four years, Sunberg was the President of the Wesleyan-Holiness Women Clergy International (WHWC) organization from May 2009 to April 2013. Sunberg also served as the inaugural chairman of the USA/Canada Nazarene Women Clergy Council from February 2007 to June 2009.[2] From 1992 to 2005, Sunberg was a global missionary for the Church of the Nazarene in the Commonwealth of Independent States. Sunberg is the only daughter of Jerald Johnson, the 24th General Superintendent of the Church of the Nazarene.

Kimberly Dirmann was born in Colombia, South America to a Foursquare missionary family and lived in Colombia until she was 10 years old. Spanish is her first language. She then spent the rest of her growing-up years in Long Beach, Calif., and graduated from Long Beach City College with her A.A. degree. She has completed three years of her undergraduate degree in social work at California State Polytechnic University in Pomona, with a passion to help local churches infiltrate their communities. Kimberly and her husband, Jerry, served as youth pastors at Valley Community Church, El Monte Foursquare, from 1986 to 1994, when Jerry was appointed as national youth minister. In 2000, Kimberly was appointed director of Foursquare Women International, and served in that position until 2005. Currently, she serves as co-pastor, family pastor and kids’ pastor of The Rock, a Foursquare Church they opened in April 2000 in Anaheim Calif. She also travels and speaks at churches and conferences in the North America and overseas. Kimberly and Jerry have been married for over 20 years and have two teenage children, Alexa and Jonathan. Both have been home schooled. 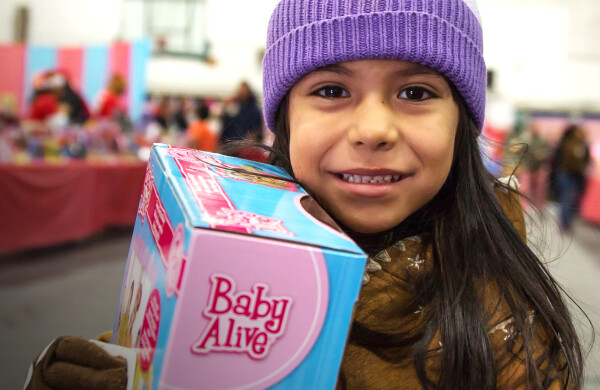 Turn 5 minutes of time into one toy for a child this Christmas!
Read More

Watch Church Online on Sunday
Stories
1.
A dancer looks right past the extraordinary blessing standing in front of her
2.
Turn 5 minutes of time into one toy for a child this Christmas!
3.
A married couple learns an important lesson on finances: money is a prison