A typical Sunday at Rock Church in Point Loma can mean getting lost in a sea of thousands of people, which for some is welcomed. For others, however, they desire a more intimate experience where they can connect with others.

Enter the Rock Church microsite location in Coronado: Proteus Gym. From the outside, Proteus Gym blends in with the other businesses that surround it, but once you walk inside, families and friends make the weights and workout apparatuses disappear.

“Not so long ago,” shares Jeff Bramstedt, former Navy SEAL and Coronado microsite attendee, “my friends, Brian Tucker and Juan “Gonzo” Gonzalez opened a gym in Coronado. They had the goal of reaching out to young men who have the desire to be in the US Navy SEAL Teams and giving families an alternative to the average gym membership. During the week, they run group classes and training systems that are very SEAL-like. Navy SEALs, trainees, future trainees, and civilians train side by side. The gym is very raw, with huge tractor tires against the wall, pull-up bars everywhere, caving ladders and ropes hanging from the ceiling, and weights in various shapes and sizes everywhere.”

Adds Bramstedt, “It was no surprise to me when Juan and Brian told me of the plan to open a Rock Church Microsite at the gym. Many of the gym's patrons now come to the gym on Sunday, but for a different kind of work out. About 30 adults and children hang around the open garage door having coffee and a laugh until worship begins. They make their way to their seats and begin to enter into the worship being simulcast from Rock Church in Point Loma. The attendance has been as high as 60 and as low as 25.”

This microsite has several attendees that either serve our country at sea or have friends and family members that do. For them, the last thing they want to do when they go to church is maneuver through a sea of people. Whether it is a looming deployment or the rigorous training schedule, their time with family and friends while off-duty is precious because they often don’t know what tomorrow holds. While the distance from Point Loma to Coronado may not seem far, having church in their backyard enables them to treasure that time even more, not just with their own families, but those they serve alongside.

“Microsites allow me to spend quality time with family under one roof,” shares Juan Gonzalez, co-owner of Proteus gym and former Navy SEAL, “and give thanks for the things that matter the most. God, family, and friends.”

“We typically think of community as an area or region,” Bramstedt continues. “Although I live in a great physical community, the vast majority of my life has been spent in a community of men and their families. It’s a brotherhood of men that have been called upon to respond to some of the most significant battle problems faced by our nation. This community is known as the US Navy SEAL Teams. Warriors, current, past and future, all of one community, geographically located all over San Diego, now bring their families to worship at Proteus Gym in Coronado.”

“Microsites allow me to spend quality time with family under one roof,” shares Juan Gonzalez, co-owner of Proteus gym and former Navy SEAL, “and give thanks for the things that matter the most. God, family, and friends.”

Even though the Coronado microsite only started in the past month, there is already cause to celebrate. Brian and “Gonzo” wanted to do a baptism after one of the Sunday services so they asked Jeff to help lead it. Each week, Jeff would share about the meaning of baptism. On May 18, the microsite attendees headed over to Coronado Beach just a few feet from the SEAL base after the service. Brian and Jeff baptized their four sons ranging in age from 8-12.

"Being next to both of my sons while they got baptized in the Pacific in the waves was one of the proudest moments as a father," reflects Tucker.

After the young men were baptized, some of the older guys, every one of them with the goal and desire to be a Navy SEAL, wanted to be baptized on the other side of the surf zone. To a spectator, it looked like a group of men going out deeper to body surf.

Bramstedt describes what happened next. “As we conquered the surf zone, I found myself swimming side by side with one of the young men whom I was about to baptize. I realized that I didn't know if he had placed Jesus front and center in his heart. We got out past the surf and formed a "swimmer pool,” a SEAL term for treading water with a group of guys forming a circle. I turned to Aaron and asked him if he had Jesus in his heart. His eyes got a little big and I assured him that it’s easy to do...all he has to do is pray a simple prayer. He was fast and willing. As a group, we prayed and then Brian and I got on each side of him and he was baptized. As we started to swim in, I turned to Aaron and said, ‘You did a surf zone passage, put Jesus as the Lord of your life, got baptized in 20 feet of water, and now you get to body surf! NICE!!’”

Even though Jeff and his family live five blocks from the Point Loma location, they travel to the Coronado microsite because that is where their community is. Pastor Miles shared with Jeff his heart for Rock Church to reach out to the military community including the SEALs. Through the Coronado microsite, this is happening. Coronado is just one of over 30 microsites scattered throughout San Diego designed to reach every street and every person with the pervasive hope of Jesus Christ. 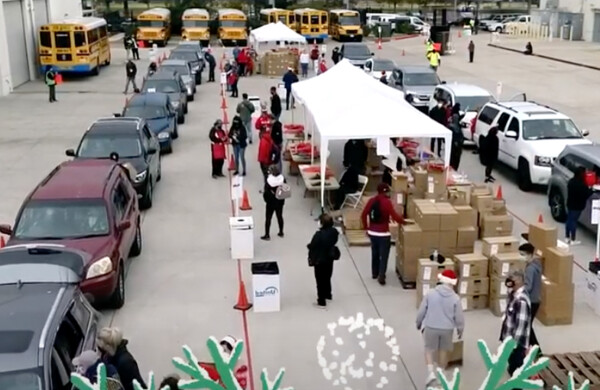