Michael Dotts was doing his best to fit in during a high school party when he noticed a crowd around a young man wearing a cool coat and a hustler’s smile.

"Why does everyone like him so much?” Michael wondered.

When Michael got a chance to meet him, things got clearer. “You’re new,” said the suave character in the coat. “You buyin’?”

“Buyin’ what?” Michael replied. He handed Michael a bag with a smile and a quick tip of his head. “See ya ‘round,” he said.

Standing there in the middle of the room with a bag in his hand, Michael had the answer to his problem. “I found what I’m going to do,” he thought.

What he was going “to do” was numb the pain of having been molested as a little boy. The result, among other tragedies, was an acute social awkwardness that plagued him. He would do anything to stop the ache of always feeling alone—even if it meant selling. The hope in his heart was exhilarating.

When Michael began dealing drugs, he felt the thrill of instant friends; smiles came at him from every direction. From the coolest dudes to the hottest girls, he was in the inner circle. He had given his life to Christ as a young boy, but God had never offered him this kind of excitement.

The rush of power was even greater when Michael graduated to selling harder drugs. With a phone in his pocket, a gun in the other, and his hands on a wooden steering wheel, Michael was the epitome of a high-powered drug empire behind a vintage ’57 Bel Air. He was negotiating with associates, making deals, selling, popping, and injecting drugs every chance he had.

With a phone in his pocket, a gun in the other, and his hands on a wooden steering wheel, Michael was the epitome of a high-powered drug empire behind a vintage ’57 Bel Air.

He lived in a high rise penthouse downtown and felt like the king of San Diego. Michael’s drug contacts in Mexico required his team to regularly cross the border.  Despite employing all the well-worn tactics the police look for - baggy clothing, drugs forced into seams, faux compartments in cars, girls with pills stuffed in their undergarments, - his runners were never caught.

Michael rolled into the San Diego club scene and scored big every night. Each night he would walk to his car with cash literally falling out of his pockets.

His entire life became selling and consuming. His mind floated in a narcotic high while his body thumped with the pressure of bettering his next deal. The poison he was selling coursed through his veins 24 hours a day. What could be found inside Michael’s system at any given moment read like an inventory list at a police lock-up: uppers, downers, barbiturates, meth, acid, pot, XTC, heroin, cocaine, opiates, and Oxycontin. His overloaded heart should have failed on him a hundred times over.

He began to apply new pressure to the people on his “owes me” list. Guys who owed him money could clear their debt if they “collected” from the guys who owed him bigger dollar amounts. He was now running a thug operation.

Michael preferred taking drugs over eating. After losing 35 lbs, his mind began to deteriorate. He burned through every relationship he had to get what he wanted, employing strong-arm tactics that all seemed to fail. In a matter of days, he lost everything. The money, the penthouse, the car; it was all gone.

A few weeks later, the boy who didn’t like being alone was a hollow-eyed junkie walking the streets without a friend in the world. He was still trying to score the next deal, however. He had no choice. There was still a memory to numb.

One morning, he thought of calling his mom and going home.  The idea of sleeping in a normal bed appealed to him. She agreed to meet him in a nearby church parking lot.

Laurie Dotts thought she had seen Michael at his worst on previous occasions. But nothing could prepare her for what stood before her that day: a boney figure, slouched under the sun in a church parking lot. As she pulled up, the cross at the top of the church was in view. When Michael got in the car, Laurie pointed at the cross and screamed at her son, “That’s the only thing that will save you, honey! That’s it! There’s no hope without that!” Tears burst from her eyes. “And I have something else to tell you,” she said. “I’m not taking you home.”

Michael couldn’t believe what he was hearing. His mother loved him unconditionally. She would do anything for him. Now she wouldn’t even take him home?

“I know you’ll steal from the house. I am not your answer. I can’t do anything for you. Only that, honey. The cross is your only hope!”

Michael stood alone in the parking lot and watched her drive away—just him, a church, and a cross. Laurie cried so hard she thought she would die from the pain.

Michael received a call later on that day from an associate asking for a gram of heroin.  It would become a pivotal moment.  Michael walked into a sting operation; five police units were waiting. His friend was offered less jail time in exchange for giving up a “fat cat.”

He was sent to rehab and while working at a fundraising car wash, he saw a Rock Church sticker on a car. “My parents just started going there,” he told the driver.

“Hmmm,” said the driver. “I feel the Lord is telling me you need to go to the Rock School of Ministry.”

“Hmmm,” said the driver. “I feel the Lord is telling me you need to go to the Rock School of Ministry.”

The day he was released, he had nowhere to go. He came across the man’s number from the car wash. “Rock School of Ministry,” he thought. “Maybe I’ll try that.”

The day he walked in just so happened to be “Bring Your Friend” day. It hit him like a bolt of lightning. “This is where I’m supposed to be!” he thought. A smile spread across his face as Jesus came to him in the smiles and embraces of the people there. Learning about the lavish love of Jesus Christ, he didn’t feel lonely and awkward anymore. In fact, the more “himself” he was, the more loved he seemed to feel.

After a short time, the young man who had plummeted to the depths of human existence was high atop a mountain in Oaxaca, cutting a path in the jungle while trying to reach a village to speak of Jesus. Says Michael, “I was already in the grave. All that was missing was the dirt and gravestone. Now I live a life filled with joy and purpose. How can I not tell others about a Savior who offers that kind of love?”

Michael has forgiven his abuser and genuinely hopes he has a blessed life. “I used to try to numb the memory of what he did to me,” he says. “But God has given me the opportunity to forgive him, and I get to feel all the glory of that.” I have Russell-Silver Syndrome. Here’s why I wouldn’t have it any other way.
Read More How God, the Ancient of Days, is using failing computers to call people to Himself.
Read More 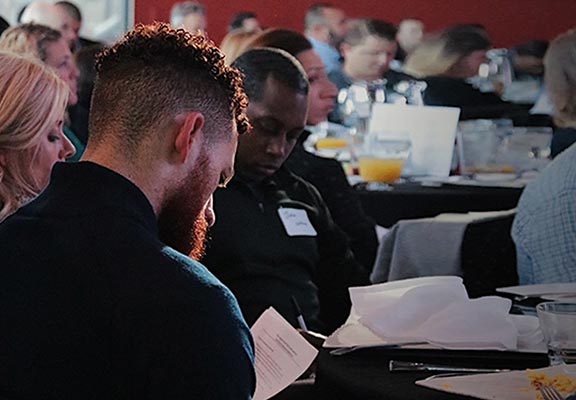 Kingdom Life Class
Stories
1.
I have Russell-Silver Syndrome. Here’s why I wouldn’t have it any other way.
2.
How God, the Ancient of Days, is using failing computers to call people to Himself.
3.
One man’s observation about his ride into the sky can change our perspective on life