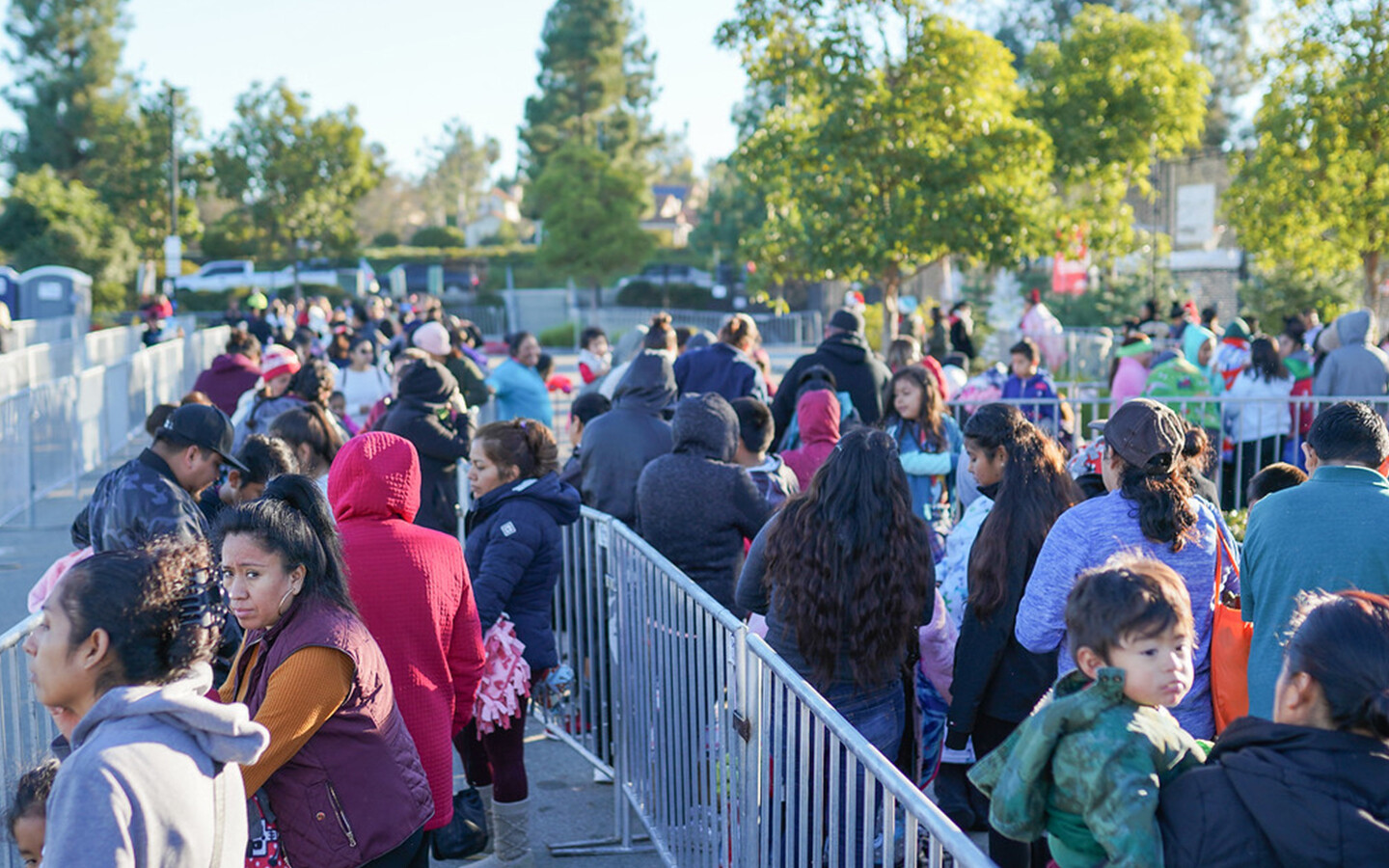 I arrived at Guajome Park Academy at 7 am. It was one of three sites for this year’s Toys for Joy event. I had arrived fifteen minutes before my check-in time. I was glad I brought a jacket because though the sky was clear and the sun was bright, it was a chilly morning. I walked the grounds and eventually found my way to the area of the gospel stage. I watched the lines of people grow by the minute and thought about the crowds who gathered to hear and come to know Jesus.

I imagined on another chilly morning 2000 thousand years before, crowds who found Him and were eager to see the man who would cure their ills, give them hope, and recognize each and every one of them.

“A large crowd had seen him work miracles to heal the sick, and those people went with him” (John 6:2).

My assignment, for the day, began with speaking with Aileen who came with her son. They entered the line at 5:30 in the morning. Three and a half hours before the gates were to open!

So much for my self-satisfaction of arriving 15 minutes early. I was struck by her enthusiasm and excitement, especially after learning that her school just closed without giving notice to the students. She had one more year to go to become a Radiology Technician, yet she remained cheerful. She remained steadfast in her dream and understood that though her education was abruptly ended, what she learned was still with her. “I still have my books, my stethoscope, and my knowledge.” She was grateful and was happy to be with her son to allow him to enjoy a gift which had become increasingly more difficult for her to provide.

The line continued to swell, snaking back and forth like a Disneyland entrance to a popular ride. Moving along the line, I met Christine and her sister Cynthia. Each brought their children and a friend’s children. It was a common occurrence I was to learn. Struggling mothers were mindful of other struggling families and wanted to help. Cynthia was grateful for finally finding an apartment after five years of being homeless. She recognized the importance of the event for homeless parents and children, as well as single mothers. She was anticipating the joy her children would receive from a toy, but also for the hot dogs. Her kids love hot dogs.

The line continued to swell, snaking back and forth like a Disneyland entrance to a popular ride.

As our conversation continued, her sister Christine found it “amazing that so many people would spend the time to give and not get paid.” I asked how it made her feel, and she said it made her recognize there are people who really care. Her sister agreed.

Once the gates opened, a limited number were allowed to gather before the gospel stage where they would hear a Rock Church leader give their testimony of how they found Jesus in the presence of their pain. Pain seemed to be the common thread to start asking questions. It was the motivation for seeking relief.

Pastor Jason, Campus Pastor at the San Marcos campus of the Rock, told his story of striving to get what the world had to offer – money, material possessions. He achieved them, yet there was still a longing for more. His search was not for more money or more things. It was an earnest quest for acceptance. Having attained success in the world left him wondering if people liked him for who he was or for what he had? That discomfort is what finally brought him to Christ, who didn’t need Jason’s things, for He owned it all. Despite his poor choices of using drugs and women, it was Jesus who accepted him anyway.

“Jesus welcomed them. He spoke about God's kingdom and healed everyone who was sick”

(Luke 9:11). Another translation says, “and He received them.” What a loving thing it is to be known and also be welcomed and accepted. How comforting to know you have many faults yet Jesus will receive you anyway.

After the gospel message, many accepted Jesus as their Savior and then it was on to the most anticipated part of the day – the toy room. Santa Claus stood outside of the room and greeted everyone and then the children entered a huge auditorium lined with toys. Their eyes could not contain their joy. Their minds could not fathom all the choices they had, but with searching, they found the toy they wanted.

Ephriam Banks was one of the volunteers in the Toy Room. Ten years earlier he tried to end his life but was reminded by a police officer that in killing himself, he would end his pain but the pain for his family would just begin. It was all he needed to turn his life around. Someone cared. His life of drugs and alcohol ended and his new life of helping himself and others began. His mission on this day was to remind the children that everyone is not against them. Love exists and this was his chance to express it.

It was all he needed to turn his life around. Someone cared.

Throughout the day, I asked most people, “What is the one thing you wish everybody knew?” The answers varied.

“I wish everyone knew how much God loves them.”

Tara of Oceanside said, “A loving God uses people to share His love with others.” She brought her baby and three children of a friend. Her hope was that the children would come to understand how good it feels to help someone else as they had been helped today.

Maye, a security volunteer, wanted everyone to know, “God loves them.”

Others spoke of happiness, health, and gratitude.

After the Toy Room, everyone entered the courtyard and had the choice of food, entertainment, haircuts, face painting, jumpers and other activities.

“Jesus replied, ‘They don't have to leave. Why don't you give them something to eat?’”

As the day was coming to a close, I sat and watched as the children played with their toys. Others bounced around in the bounce houses. The entertainment covered dancing, singing, hula-hoop contests, and other fun competition.

Hundreds of conversations surrounded me, but it was my turn to contemplate and answer my own question. What was the one thing I wished everybody knew? I already heard from others about the love of God. Love was certainly apparent in all of those I spoke with, but I felt there was a unique message just for me.

Throughout the grounds, there were huge signs welcoming everyone to Toys For Joy. However, just below those towering words was the slogan, “It’s more than a toy.” What was “the more?” God asked me. Everyone I spoke with possessed a giving spirit. Parents bringing other children than their own. Volunteers waiting to see the excitement in the children’s eyes. Rock Church members eager to tell their story in order to reach someone and let them know they were not alone in their struggle. There was an answer, for pain. There was a solution to their isolation and misery.

Everyone was helping everyone else and it became clear, and I wish everyone knew that it is impossible to help someone and not be helped yourself. In helping others we let them know they belong. A loving God made it so. His lovingkindness welcomes us to His family and we rest in His joy, for we all wish to belong.

GIVE - VOLUNTEER - PARTNER at this year's Toys for Joy event.